The History of Caesar Salad – invented from food leftovers

Myth: Caesar Salad was named after the Roman Emperor title. 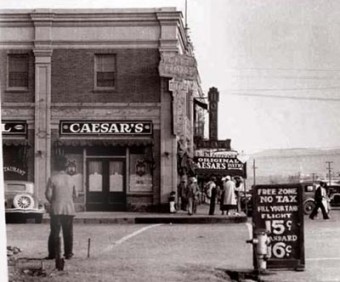 Caesar Cardini was an Italian-born chef who immigrated to the United States after World War I. Despite having a home in San Diego, the Cardini family operated a restaurant in Tijuana, Mexico, primarily because of prohibition. Many Americans would go to Tijuana to drink, so business for restaurants at that time in Tijuana was booming.

According to Caesar’s daughter, on July 4th, 1924, Caesar was running short on supplies due to an unexpected rush of customers. In order to not have to turn customers away, he concocted a salad and dressing out of some of the remaining ingredients he had lying around.

Another story by a partner of Caesar, Paul Maggiore, said that the Caesar salad was actually made for American airman from San Diego and was called “Aviator’s Salad”. Caesar’s brother Alex also claimed the original name was “Aviator’s Salad” and that it was he who invented it, not Caesar.

Yet another story from a retired airmen backs up the “Aviator’s Salad” name, but not that Alex Cardini invented it. In his story, he claimed that, after a long night of drinking, several of the soldiers missed curfew and had to stay at Caesar’s restaurant for the night. When they woke up in the morning, Caesar made them a salad which he called “Aviator’s Salad” and is now known as Caesar Salad.

Whatever the true origin, it is clear that this particular type of salad was made popular at Caesar Cardini’s restaurant. As it grew in popularity, people gradually began referring to it as “Caesar’s salad”, as it came from Caesar’s restaurant.

Comments are closed, but trackbacks and pingbacks are open.